Why Use NFTs for Project Membership?

Since the Radicle Funding Team first announced NFT Community Tokens, one of the questions that has come up the most frequently is:

“Why should we use NFTs to represent membership for project supporters? Couldn’t we simply record the membership status of various supporters in a smart contract using a “registry” model instead?”

This is a great question! In this post, we will share some of our design thinking around Community Tokens, and why we believe that an NFT-based design can offer significant advantages and flexibility beyond what a simpler registry-based design allows.

In any kind of donation or patronage relationship, one important benefit that a beneficiary can offer to a supporter is the ability to display some kind of badge that publicly acknowledges that support was given. This pattern can often be seen in non-profit organizations, for example, which frequently publish names of significant donors, or give out clothing, mugs and other items that supporters can display to show that they donated.

In a digital world, and particularly in the world of blockchain dapps, this is more difficult. For example, how does a project maintainer give a badge to a supporter who is pseudonymous by default? One possible solution would be to develop custom functionality around a simple registry smart contract that would allow supporters to attach identity to their record of membership, if they wished, along with custom Javascript widgets for displaying their supporter status on a web site or social media profile.

However the reality of this sort of highly-specialized custom tooling is that it is difficult to develop and maintain, and even harder to drive adoption for. With that in mind, we asked ourselves: what if we used NFTs to coordinate supporter contributions? Could they function as better badges of support?

A major advantage of using NFTs, in this respect, is that there is already a tremendous amount of standardized tooling available for managing and displaying NFTs (see the screenshot from OpenSea below, for instance). Additionally, because so many of the existing use cases around NFTs are built around the idea of scarcity, many tools for browsing and displaying NFTs are highly optimized to highlight each NFT’s specialness and importance, and we believe that this will help project maintainers and supporters recognize the full impact of the supporter’s contribution as a badge of honor. 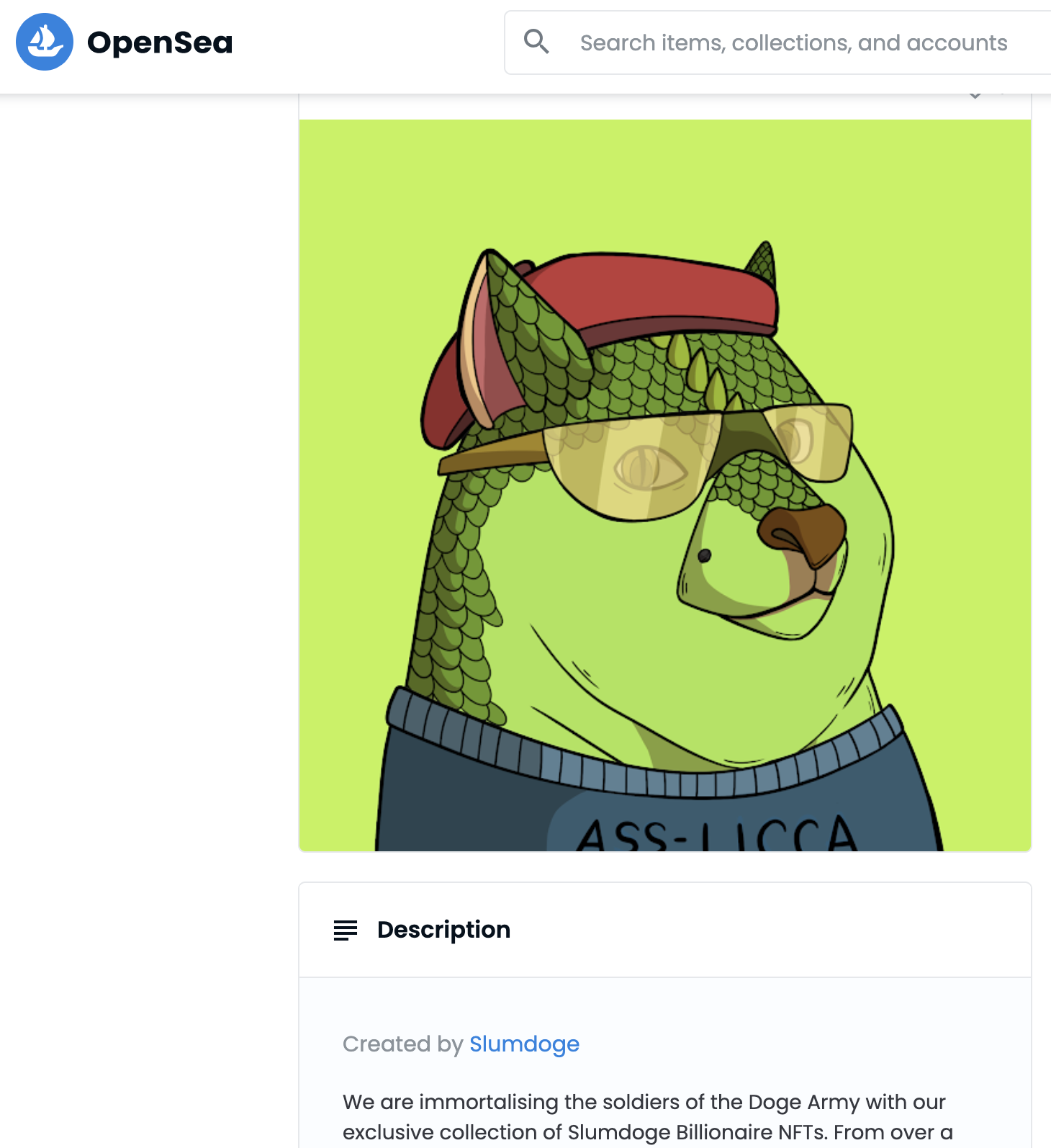 An additional advantage of implementing Community Tokens on top of NFTs is that it would give projects flexibility to incentivize early contributions and support. For example, consider a scenario where a project offered a limited-edition Community Token to its early supporters that granted these token-holders a very high level of access and a large number of Snapshot votes for the lifetime of the token. Such designs could cause supporters to want to get in early with their contribution, on the off-chance that purchasing significant influence and access to the project might become more expensive later on.

While it’s true that the delivery of these sorts of incentives could be accomplished using a registry-based approach, an NFT-based design would have advantages for most users in any scenario where the user wanted to transfer the accrued value to another address. This is true simply because of the quantity of standardized, battle-tested software that already exists around managing ownership of NFTs, as well as the familiarity that many Ethereum users already have with such tools.

Even if a project didn’t choose to utilize built-in incentives like those described above, for prominent projects, early Community Tokens might still come to have a kind of “antique” value someday just by virtue of being the first minted, and therefore make them more desirable to supporters.

Regardless of where the value originates, an NFT-based design allows any value that accrues to a Community Token over time to be easily transferred or exchanged later on, which unlocks more ways for projects to incentivize supporters to get in early and bootstrap funding during the difficult early phases of fundraising.

Another way that projects could reward their supporters would be to offer access to member-only content and communication channels for support. A simple version of how this might look would be a private Discord or Telegram channel that was available only to project supporters, where bug announcements and other general project roadmap discussions were disseminated, and high-touch chat-based support could be provided.

Conveniently, tools already exist that allow bots to be utilized as “concierges” for providing permissioned access to these sorts of messaging platforms, based on token holdings (including NFTs). Specifically, Collab.land has a solution that is currently in public Alpha that supports Discord and Telegram and Coinvice also has a similar bot-based solution for Discord. With these solutions, roles are granted to users through a challenge-response interaction with the bot once a user has joined the general channel on the server as a (non-permissioned) user.

By building our membership design on an NFT, we believe that projects will be able to easily build on more and more tools like those developed by Collab.land and Coinvice to automate and streamline the process of offering special access to members whenever it makes sense for the project to do so.

One possibility here that interests me is less the ability of an individual to fund a project so much as an org or a simple multisig being able to do so. For instance, if a token-holding org had privileged access to issue reporting, then members of that org could maybe post under their own IDs as “ambassadors” of that org (or even multiple token-holding orgs, as the case may be). One difficulty I see in such an approach is in conferring value upon a token which might be held by orgs of differing sizes, and one solution that occurs to me is for such a token to be “always for sale,” meaning that the org must determine the value of that token for itself, with its periodic contribution calculated from that value. (either 100%, or else some portion of a larger sum, the bulk of which could perhaps be staked toward some end or another if not simply paid to the token creator or prior holder… I have some thoughts around this and particular use-cases in mind, but this might be relatable to the DEV protocol)

For instance, a project can determine how many orgs of reasonably comparable size wish to offer support to their project and allow as many tokens to be minted so that each of these orgs has the opportunity to acquire one for themselves as a sort of series ‘A’ funding. If there are smaller orgs also wishing to offer support, another series may be minted for that purpose. If a funder’s token of whatever series gets bought up by a significantly larger org, an additional but more limited series might be issued with similar standing to the original, so long as the project maintainers feel capable of on-boarding additional support (given that the privileges there entailed may represent an increase in obligation for the maintainer). Additionally, time-locks of some sort could be incorporated to prevent serious disruption in the course of a transfer of ownership while also allowing for the coordination of new series of funding to smooth out the transition. (incidentally, this in itself would probably dissuade spontaneous or unplanned buy-outs, particularly as speculative power-plays)

Alternatively, a project may simply offer one sort of token for orgs/multisigs (designed to support specific functionality for orgs) and another sort for individuals. I’m not certain though if it would feasible or even possible to offer meaningful tiers of org support (set limits on the number of ambassadors, perhaps?), which is part of why I would favor the other approach to this one. More importantly, the “always for sale” approach renders that support as something of a public good, meaning that it cannot simply be monopolized by first-movers and/or deep-pockets, and the value conferred upon it would be more commensurate to that entailed.